One method of painting might be to substitute a system of signs for the visual phenomena of reality. (This would certainly be possible in doing landscapes, but perhaps even in figural compositions.)

”...If we are in touch with reality, we can go on to see where a theoretical proposition will lead us, and seeing that our reasoning has body, can [let our imagination] soar, without having to fear that the gravitational field of reality will prove too weak for it”.
Quote from Attila József's theoretical writings.

To clearly see our possibilities, we must assess our circumstances/endowments.

If I express them with cold rationality (deliberateness), I create an effect. If I want to express anger, hatred, war, fire or malevolence, I must exclude certain colors, those which are not biologically connected to these themes. The example will be how I go about it.

I must rationally select colors and forms, and arrange them into a composition in such a way that they will bring nothing else to mind. In this way, I can make painting a perfectly rational thing (or so it seems). But for this rationality to become completeness, it must develop it into abstract correlations which way exceed the parameters of rationality.

What I have sought, and am seeking still, are those permanent and simplest of elements which would allow me to rebuild everything according to a different logic. That's why I've broken down form into line and blot. These may take the form of various shades, and then the result is graphic art, or they may be colored, or multi-dimensional. A line may thicken, may turn into a blot, a mass, etc. The steady stream of correlations and cross references generates the composition. There is a certain tension in all this, as the elements get disconnected from one another or come to contradict one another, but somehow the connection is still there.

Systematization: a composition must have amorphous forms so as to be airy; but it must also be constructive and self-contained through the correlation of the amorphous forms.

My aim is to create an amorphous world of forms which strikes one as real, and is fully human.

Thought gets objectified.
The composition... is a mathematical correlation.
Dynamic... Not eye-catching, but effective forms.

I've just arrived at the “piece of wall” principle. I will unite the constructive approach with the lyrical.

Movement always follows natural laws.
When I walk, I must shift my weight from my left foot to the right one, or to a substituting crutch;
but in that case, the movement will not be “graceful”. 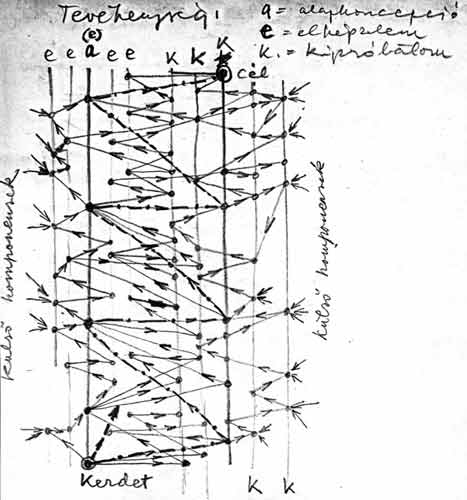 Look for the coincidental, then put it to use.

What can I draw conclusions from? 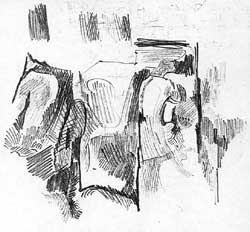 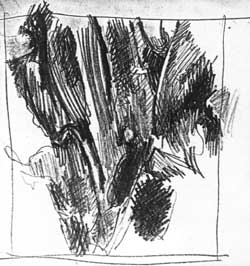 One does not depict; one makes things visible.

Directions: Every blot has a direction, either static or dynamic, indeterminately directed.

A work of art must have a certain fullness, and a decided simplicity. That's what makes it a work of art. Fullness makes it concrete, and its concreteness, coupled with simplicity, makes it understandable. All the viewer has to do is to tune in.