BALATONBOGLÁR: Today it is you who will open the exhibition (an exercise in responsible action) documented by slides.

Plan
To take typical photos of (different) people, for example, to stand in a certain spot, and take pictures of ten different people in analogous situations (e.g., as they step over the railing of
a sidewalk).

ACTION PLAN in a public space

The basic idea: visual things begin when information is transmitted expressly through vision. The information must be concrete.

A wide-open space which people cross from four or more directions. As they pass, they step into different colored powdered paint, and their footprints create a composition.

HOMAGE TO VERA MUHINA performance, and its elaborations; Hösök tere (Heroes' Square), Budapest (with Julia Klaniczay and G. A. Cavellini)

Idea: Man is a “trans-functioned” statue.
Realization: The reinterpretation of Vera Muhina's statue (the birth of the “statue vivante”).

The original: A statue symbolic of the worker-peasant alliance: a man and a woman striking a purposeful pose, their hammer and sickle (symbols of the revolution) raised high above their heads. Muhina's statue stood atop the Soviet pavilion at the Paris Expo of 1937; later, the Mosfilm Studio adopted it as its emblem. To the public mind, it came to symbolize the Soviet Union as a whole.

Reinterpretation: Similarity: The figure “man and woman” harks back to the most deep-rooted of conventions; it is the smallest unit of the collective. Purposeful, forward-striding pose.

Differences: Hammer and sickle to be replaced by book. The reproduction of the statue in the book is at once the starting point of the reinterpretation, and part of the reinterpretation. Within this new context and related to the book, there's writing on the figures' clothing: the most distinguished names in art history, signifying world art. The man and woman represent not two different classes, as in the original, but the smallest unit of a classless world.

Location: Hősök tere. The scene of displays of national pomp and political power, under whatever government. The nation's theater. (The new National Theater is to be built on Felvonulási tér [Parade Square] not far from here.) The point to which Budapest's one and only avenue leads. The avenue starts in the heart of the city, to come to rest in a natural setting, [a park]. It terminates in the sweeping semicircle of the Millennial Memorial.
It is here that [statues of] the key personalities of Hungary's thousand-year history are on display. The Museum of Fine Arts on the left of the square stands for the old masters and for world art; across from it, on the right, the Exhibition Hall with its constant stream of temporary exhibits stands for contemporary art. The geometric center of this square was the setting where the “trans-functioning” of the statue was enacted.

Direct motivation: The presence of the Italian artist G. A. Cavellini, and the possibilities inherent in his artistic approach: self-historicizing. Cavellini's manuscripts-written on the naked bodies of other people or on objects, such as his own clothes-are parts of his own real or imaginary history. Cavellini is symbolic of all the Italian artists who introduced European culture to Hungary. (The strong Italian influence on Hungarian art is common knowledge.)

The life of the statue vivante:
In the past:
- A stroll through The Art of the '50s exhibition in Székesfehérvár. Living Realism meets Socialist Realism. Timelessness meets time. The whole meets the part.
In the present:
- The clothing exhibition in Szombathely: melancholy contemplation.
- The textile store room of the Savaria Museum. Zero time-endless time. History of zero duration.
- The trans-functioned object as statue vivante at an exhibition at the end of Felvonulási tér. Art-life identity. Statue + statue = statue.
- Walk along Felvonulási tér: among people, past the VIP tribune, encounter Lenin.

CLOTHES MAKE THE MAN? People all wear different clothes. Clothes are the expression of one's personality. What happens when this “expression” is unusual, and occurs in an unusual place? That's the question I want to see answered by presenting, in a variety of settings, clothes that Cavellini and I made in 1980. The idea is to film what happens, and (in the next few years) to make a collective film based on my own ideas and the ideas of all the participants. I would donate the photo documentation to the Savaria Museum of Szombathely.

Every real work of art is polysemous; thus, I was perfectly able to transform the ideas I had for works of anti-sculpture into works of anti-textile, thanks to the circumstance that I was invited to take part in the Velem symposium. The word “expression” was a master stroke, for it allowed for the creation of inter-medial works carrying the widest possible range of meanings. I would like to append the following texts to my works:

1st c. B.C.: the idea emerges as the object of artistic representation through form,

A.D. 1st c.: Art is the realm of innovation in techniques of representation,

A.D. 3rd c.: we perceive something as beautiful by comparing the perceived object with our intrinsic idea [of beauty],

A.D. 5th c.: matter derives its inner light from the glow of the idea,

A.D. 14th c.: art is a language, form is inseparable from meaning,

A.D. 15th c.: sense experience is imagination's best sustenance, beauty is nothing but action and liveliness, the reflection of the idea,

A.D. 17th c.: he who undertakes to imitate God through painting human figures is far more excellent than others,

A.D. 18th c.: beauty is infinite variety; whoever believes in only one system has banished universal love from his heart,

A.D. 19th c.: one kind of beauty does not exclude the other; all together are the manifold manifestations of supreme beauty,

A.D. 19th c.: a work of art is not an isolated phenomenon, but part of a whole; works of art are facts and products whose nature and causes must be studied; there's no need to do anything else.
DRESS DESIGNING AND VIDEO PROJECT: the pattern of the statue vivante's clothing is screen printed for reuse as raw material in a videotape made at the Textile Symposium held in Velem.
The objects of the trans-functioning: table, bottles, glasses, road, tree trunk, drainpipe, men, women and children.

THE VELEM VIDEO PROJECT: Location: courtyard, lawn and narrow path.
A group of people-dressed in their own clothes-sits down at the table; they pour themselves drinks from the bottles, drink and chat. (cut) Transformation. When they set their glasses down, everyone is dressed in script-printed clothes; they all start walking toward the street down the script-printed path. The script-printed clothes gradually fall off as they walk down the street, leaving a trail behind them. They disappear. From the opposite direction, another group comes, dressed in their own clothes; they turn onto the narrow script-printed path, and head for the table. They sit down at the table, pour themselves drinks from the bottles, drink and chat.... (Personal commitment. The individual and history. The cyclic nature of things.)

REMEMBRANCE OF A MESSAGE

In 1976, I did, and then put on exhibit a series of silkscreen prints based on a self-portrait taken with a photo booth. The series meant to investigate the questions of personality, existence and the ego.

I asked Miklós Erdély to open the exhibition. He told me to get a copy of the International Code of Signals. At the opening, Erdély read out the text explaining a particular code, while I signalled the code with flags. At the same time, two other friends of ours tried to strike a fire for the purpose of sending smoke signals.

Miklós Erdély was not just a colleague of mine, my teacher and my friend, but also one of the greatest figures of Hungarian art.

To preserve his spirit I've prepared this memorial, which develops the theme of the 1976 opening (my assistant was Katalin Timár, photos were taken by Júlia Klaniczay).

I realized a bookwork and a performance with slideshow of this memorial project, where I've used a text of Miklós Erdély from 1981 as an introduction.

1. One must recognize one's responsibility for one's life and fate, and insist on this responsibility at all cost.
2. This responsibility extends to everything that touches on one's life either directly or indirectly.
3. Consequently, there's nothing to which one's responsibility does not extend.
4. One must dare to notice whatever is bad, mistaken, painful, dangerous or senseless, however widely accepted and unalterable that situation or thing might seem.
5. One must dare to suggest even the most unrealistic, the most unrealizable of alternatives.
6. One must be able to picture these options as realizable.
7. One must consider low-probability alternatives that promise great benefits every bit as seriously as high-probability alternatives that promise few advantages.
8. One must do without delay whatever one can, given the limited means at one's disposal.
9. One must refrain from every form of organized or institutionalized activity. 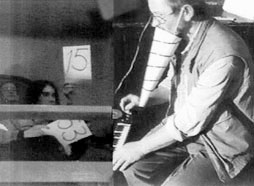 The members of the audience are given numbers with which they can control the performance.
They are asked to hold up their numbers,
and thus instruct the performer to play the sound associated with the number. 30+25+3=58 numbers will influence the rap-piano's tune.
The Rap Piano, with its controlled choices,
works as a democratic “government” led
by the “people”.
The resulting music gives the audience a sense
of freedom.

The production of the music is achieved through pushing and striking, and cannot be compared to the act of playing an instrument, for it does not even attempt to create a composition. If a composition results, it is by chance. (The audience can take home the signed numbers, authenticated with a rubber stamp, to frame and display as graphic art.)