Plan for an exhibit in the chapel

Title of the exhibit: Signs of Life-Signs of Existence

Graphics, painting, sculpture, movement, spatial images, temporality - music - projection, light effects - moving inner space constructs -one enters and experiences a distinct sense of fascination (the direction of the flow of traffic is indicated on the floor).

Pictures not on the walls, but away from the walls.
Picturesque surfaces moved like folding screens

A variety of suspended amorphous moving objects and standing lattice-work against a natural background.A cube made of glass, with graphics inside. Various explanatory and road signs.
Suspended black cubes
Glass cubes or globes

White piano
The pianist in white attire
The floor, too, should be whitewashed.

At night, the ceiling lit up (diffused light)
Perhaps colored or flashing light

The chapel's connection with the artworks is that of real, autonomous space

“The geometry of amorphous forms”

Symbol: Everything that does not stand for itself, but points to something beyond itself, i.e., stands for something else, can be considered a symbol.

The anatomy and psychology of amorphous forms.

We cannot go beyond what we do not know.
(In a way this, too, is like an axiom of geometry.)

THE SZENTENDRE ACTION
Experiment in didactic and dialectic identification

The sense of the texts from the point of view of the action lies in that-unlike in their original context-they do not relate to the pictures; this gives the objects, and the texts themselves, a new meaning.

It becomes understandable and comprehensible only in the sphere of sensation!

My term “the geometry of amorphous forms” is just a system of correlations: it can be helpful in explaining a number of creative systems.
It does not, in itself, define art.

Art is indefinable, it defines itself.

1. Symmetry project / for an exhibition

The reverse of the reverse
Video recordings, reversed by mirror, of the “Wall” (Berlin Wall), which can be seen properly only in a mirror on the wall.

Notes to THE WALL video installation

1. Basic idea: A portable piece of wall (of the Berlin Wall) to emphasize the ubiquity of walls. The wall is a contemporary symbol of peace. (Walls are of no use in a modern war). The wall symbolizes the sort of dumb peace that rules in a zoo, and is an important element of the terrifying culture of silence (“the walls have ears”). In peace of this kind, knowledge is stifled or crushed; the only voice is that of the culture of those in power.

Fight the Wall with the wall: “Heal the dog bite with dog hair”.

2. Symmetry project / for an action 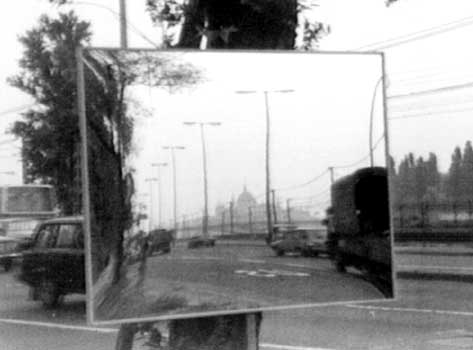 Note:
“Incidental” works do not aim at immortality. They become “immortal” only because the phenomenon to which they are related (or to which they refer) are timeless. 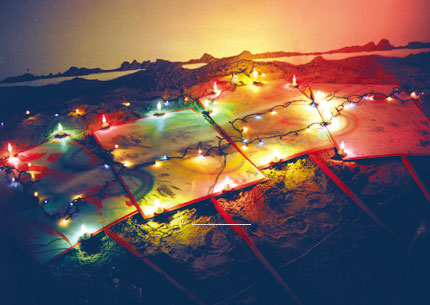 It must be “powerful” enough to trans-function the objects. This is some sort of symbolic realism.
The inside of the garbage can is painted silver; the sound of the video comes from a speaker; the pulsating light of the video comes from the garbage can, which is covered with a piece of crumpled, red photographic paper, changing the white light to red, and creating the effect that something is burning inside the can.

Positioning the speakers and the electronic newsflash; the size of the video screen.
Colored, fluorescent pebbles in the sand: fluorescent paint + UV lamp.
Get or make the material with hole cut out at the appropriate spot, to cover the video projector.
4 colors: pale green, yellow, dark green, brown.

The atmosphere should be that of an abandoned beach or camp site, with garbage left all over the grounds.

“Nature as a whole is a system where information...is continuously disintegrating.
Man defies this natural entropy when he not only accepts, stores and relays, but-and in this he differs from all other species-deliberately generates information. This specifically human
and unnatural ability is called the “intellect”, and its effect is culture: in other words, implausibly formed, informed objects.”

From Radio Danubius
The war, the world
Text + commercial + text + commercial in quick rotation
Text: typical phrases pointing out the characteristics of the war (e.g., radio-electronics)
Editing possibilities are quite poor, so exaggeration may be necessary. Like when I paint, and the brush-strokes hang out, extend beyond the form.
Commercials: (a very interesting form of historical documentation) what do they advertise? How? Aim at variety. If it is repetitious, cut differently.
There may be a second edit, but try for brevity.
Chance factors are decisive here.

The war as background may be allowed to filter in (indirectly), for example, Hungarian national security considerations, and other indirect news items, such as the price of gasoline. (Only bits and pieces, by way of intimation.) The attitude being that there's a war somewhere, but we're not worried, though it might cross our minds.

Danubius vs. Kossuth
World vs. “somewhere else”

1. Only the English-Hungarian (CNN) material.
2. Only very personal material. (People make war the way they create works of art.)
3. If possible, cut only short episodes in rapid succession, like a mosaic.
4. The players:
- soldiers (“artists”)
- politicians (“managers”)
- the public (demonstrators and those who react: “critics”, commentators)
- try to do it as if it were a story about the world of art
- many expressive faces, statements and contradictions.

Make an hour-long tape; needn't record everything, for nobody watches it all. What's important is that all segments be equally interesting and meaningful from beginning to end.

How is human behavior made manifest in the Gulf War?
It is expressed in the context.

Intermixed at our late-20th-century level of technology, the net effect is extremely comic and infantile. Could this be the behavior of an “artist?” If not, what can he do about it?
Does he join in? How? (Or does he demonstrate?)

Screens show nothing but pictures.

1M Long still shot of the slow local scene.
2M Edited newsreel on ground action in the Gulf War.
3M Direct camera shot of the person in the doorway.

1H News and commercials alternate.
2H Weather and traffic reports alternate.
Panel pictures 1T, 2T, 3T, 4T on the ground, illuminated only by a UV lamp.
Two beams of light (starting from left and right) directed by the sound undulate across the pictures.

THE WELL
The screen positioned at the bottom of the well shows scenes of aerial fights in the Gulf War, creating the effect that they are reflected in the surface of the water in the well. It has an opposite meaning as well, one best expressed by the Hungarian saying “fell into the well”, i.e., something that has fallen through.

2.1 expanded thinking
2.2 nothing is impossible: tasks
2.3 Understanding the great many “foreign” cultures enhances sensitivity.
2.4 Tolerance for thought vs. technology
2.5 Attempts to increase our longing for the unknown.
2.6 Insight is the cathartic experience of identification and differentiation, which, in time, will become the experience of being. (This is what will be gained by the experiments.)

II. The question: When does basic research influence practice? The answer: When there is
a “crisis”, i.e. when small changes produce no results
(at times like that, previously ignored factors come to the fore.)
What is practice? It is where the changes take place.
All inventors are conscious of this.

“Basic research” goes before practice, but also lags behind.

1993, October: Galántai's comprehensive exhibition, 'LifeWorks', at the Ernst Museum. He arranged the entire display area to look like an apartment.