They're not music, nor audio-poetry; sound works border perhaps on phonic poetry, or on the audio play and its phonic inventions, which in themselves are autonomous forms of expression. They don't want to illustrate, or entertain, or be other than themselves! In their directness, they are as close to super-realism as they are to minimal art. The rules of gesture, conceptual art, Fluxus and of happenings apply, but the uncalculated openness of the Dadaists also comes to mind, where chance is the most important principle of organization after intuition. The most important characteristic of a sound work is that it is the documentation of man's intellectual freedom, and as such, suggests several planes of interpretation. Therein lies its value. It is direct and abstract at the same time. It lives up to the most conventional expectations that people have in connection with a “work of art”. But it does make one demand on the perceiver: change while you remain unchanged, reshape your thinking
while you remain true to your real values,
forget appearances, develop yourself,
become enlightened.

The same: mixed-up motifs of some musical piece transmitted from different locations.

Voice material. Theme. On an ongoing basis, successively. Record for several days in a row the text of the “exact time” announcements on the radio.

“A while ago, on the 'Portable Radio' program, I introduced a sound work of mine based on the silence of the pauses: Cut Sound Zone. Now, I want to introduce another pause work, essentially, the sounds of the empty ranges between radio frequencies, i.e., the blank frequencies between stations. This is a pure, true field, an unknown realm without verbal information, and thus one that is free of lies, rumors and terrifying news. This is the natural sound of the radio, so what we hear is the Natural Radio.

As I ventured into the sphere of radio sound, I concentrated on sound effects which, I felt, had some musical quality. I was amazed to find what a tremendous amount of musical articulation there is in the range of radio sounds which nobody listens to, for it is generally considered to be irritating, meaningless noise.

I would be happy if some day the entire tape were played in public. Those who could stand it would find it very relaxing.”

Performed seriously, solemnly, slowly; the speed, accelerating at times, does not have to be even, but has to be within the limits of tranquility.
In strict time, but within that, there is room for a great deal of feeling and creativity.
Should be performed in a white suit, in a dark room with a spotlight only on the sculpture.
Props: a stopwatch and a music stand.

What it really is is the junk of existence, the tangible, trampled trash of existence, something that only painting can put into “one picture”. Painting is the art of the moment. Condensed time.

Slogan:
EITHER YOU CHANGE THE WORLD OR THE WORLD
CHANGES YOU

Berlin, 1988
Find but a minute part of the world that's true, and you've found the whole world.

Every motif, articulation, developed or adopted mechanism of human experience as a whole is valid and simultaneously operational at any given moment. In the same way as at any a given moment of history, which contains all preceding events in a positive and/or negative sense. 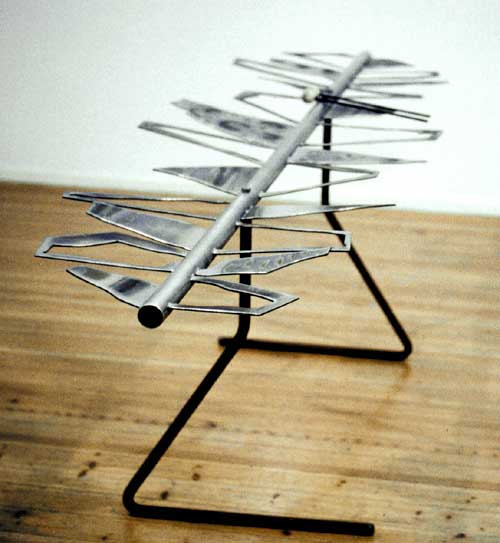 Hungarian broadcasting (with receivers installed on the head)

Text: “I can say my most important sentence.”
i a a i o e o a a a
(Played with vowels, and then with consonants)
Like: Natural radio signals.

Play this in all its variations.

Szkárosi:The composer of today's sound work is György Galántai. The title of the work we've just heard is Cut Sound Zone. What does this subtle, enigmatic,

and at the same time plastic title mean to you?
Galántai: Cut sound zone means that I took a musical realm, or sound zone, and cut it, because
I wanted to model something that happened to me

in the '80s. There was a realm, the realm of things having to do with me, and it was always being cut. That's what I tried to reproduce in sound. That's the “cut sound zone”.
Szkárosi: Now that you mention it, we do recall that the realm open to you, both in the strict and in the wider sense of the word, was constantly being cut off. This, of course,

György Galántai: My acoustic sculptures are primarily sculptures. One can do different things with them, whatever one feels like, and that's how sound is produced. The sound is as much a part of my sculptures as their titles; they're all part of the idea.
The sounds are the expressions and the products of the sculptures, and are one with the person in touch with them. They effect a type of communication.
A relaxed and liberated attitude is a must in connection with these sculptures, for the relationship, as in the case of instruments, is a spontaneous one, and cannot be planned ahead. Acoustic sculptures-the contact with the sculpture and its result, the sound-are meant to entertain only to the extent that a work well done would entertain.
Everybody hears his own sound; thus, there is no cacophony, and no finished composition. The composition stays open, and can be continued.

In the last fifteen years, I've done two types of sculptures:
- ones that work mechanically, and
- “percussion” sculptures, ones that must be struck.

I'll try to introduce them briefly:
- Directed Chance refers to the turns life takes;
- The Step Root's Motor is the progress, through the forest, of an unknown vehicle;
- Memory Mill is a dried-out, clanking concrete mixer stirring pieces of stone;
- Oriented Half-Wheel is painful and awkward; it is a railroad car struggling to move, or an elevator, which occasionally has something bump into it;
- Space Ring and Time Ring reflect a sense of space and time in infinite and yet circumscribed space;
- World in Motion is the random ringing of cowbells: the sound of cattle going home. Its acoustic variant is the echo of the plains-of cosmic space.

An infinite shape, the ring, encircles a finite space, where the happening is realized. Within this finite space, an infinite series of sounds projects the connection with the infinite. In theory, the result could be infinite music.

The changes of sound are a function of the intensity of the movement.

Not the virtuosity of instrumental brilliance, but thinking, creativity, understanding and relaxation constitute the value of our activities.

The correlations “object equals sound” and “man equals creation” are what determine the character. Only the character is given. The quality is in the mind of the beholder.

Acoustic sculpturing takes us into a realm of music born of the language of the visual arts. In looking at a musical instrument, we rarely stop to think of the great contrast between the material of sound, and the material that the instrument is made of.

The musical instrument provides the sound; the acoustic sculpture is its equivalent. The material composition, thus, creates a new sphere of sensation.

The acoustic sculpture prods to activity. (You want to enjoy? Work! Be an artist!)

Bicycle bell and spokes, combined with the rap piano, short pieces on the same note, for the opening of Ray Johnson's bicycle project exhibition.

Concept:
What all can happen in the same form.